The President’s Day sales have ended, which means we’ve moved past the celebration of several U.S. Presidents on the third Monday of February. While this blog has previously shared several presidents’ lack of enthusiasm for birthday pomp and circumstance, a Washington Post columnist this year shared some great findings about just how nonplussed these guys were with their birthdays each year.

Consider George Washington: When he turned 28, he spent his birthday building a fence around his peach trees). As he got more distinguished, though, others couldn’t resist celebrating him. At his 46th birthday, a group of Revolutionary War soldiers surprised him by playing fife and drums outside his quarters at Valley Forge. One hopes the enemy was not within earshot (talk about giving away your location!).

T.J. — the man of the tall hat — wasn’t a big birthday fan either.  He reportedly said the only birthday he believed in celebrating was the nation’s. Jefferson wrote the Attorney General while president declining to let his “birthday be known” and stating he had also “engaged [his] family not to communicate it.”

At least FDR embraced some fun while in the White House. For his 52nd birthday, Franklin Roosevelt hosted a toga party and dressed as Caesar. First lady Eleanor Roosevelt dressed as the Oracle of Delphi, and other guests wore white robes and Grecian headbands.

FDR was also honored by 52 dancing girls carrying electrical candles and making themselves into the shape of a cake before singing Happy Birthday.

John F. Kennedy’s 45th birthday also prompted a big celebration in New York City’s Madison Square Gardens. One of the most memorable moments was Marilyn Monroe’s rendition of Happy Birthday Mr. President. Her dress also garnered attention — she had to be literally sewn into the backless gown she wore in front of 15,000 guests (Mrs. Kennedy was noticeably absent).

JFK, onstage afterwards, said: “I can now retire from politics after having had Happy Birthday sung to me in such a sweet, wholesome way.”

President Barack Obama was a bit more moderate when he celebrated his own milestone birthday at the White House. He celebrated turning 50 with an outdoor barbecue in the Rose Garden followed by music and dancing. The guest list did include some luminaries, though: Rapper Jay-z and actor Tom Hanks attended and Stevie Wonder provided a serenade.

Thanks to an article in Latina magazine, I can now share with you some of the unique ways in which those of Latin American heritage celebrate birthdays. Or, as someone would say in Portuguese, aniversário.

Peru is on my list of places to go for birthday celebrations. Apparently the birthday celebrant gets to indulge in un torta de chocolate (chocolate cake). Others might eat pastel peruviano, a crusty bread filled with raisins. However, just as at home I prefer my pie and cake without ice cream, I’d probably defer from an accompanying scoop of helado lucuma, an ice cream made with the lucuma fruit, native to Peru and Ecuador.

I could handle Colombia — as long as the typical egg was cracked over my head early in the day, before I was dolled up for a night out of festivities.

I’ll steer clear of Mexico, though. Apparently they like to sing LAS MAÑANITAS and then push the person’s face into the cake. What a waste of a perfectly good cake! Sounds a little like the smash cakes I wrote about for one-year-old’s birthdays here in North America. On the flip side, I wouldn’t have minded going when I was 15 — having a Quinceañera Celebration would have been fun! Although it looks as if you still get your face smashed into the cake:

I’m also going to give Argentina and Brazil a miss on my birthday. I don’t have any interest in having my ears pulled, thank you very much. This also means I’ll be steering clear of Hungary (where they also have this tradition).

Interestingly, there was no mention of the piñata though! Maybe it’s like spaghetti (which we associate with Italy, but isn’t actually from there?).

What country would you want to travel to for your birthday? Imagine you could go anywhere in the world…

There’s a lot of complaining about December birthdays. I have two friends born on December 25th, another December 23rd, and my husband’s is December 30th. They all have bemoaned the sharing of their birthday with Christmas. Even my mother, a December 16th child, has talked about having birthday presents combined with Christmas presents, which according to at least one web critic is a big no-no.

Yet, I wonder if people who have January birthdays could be worse off? I’m an October baby (as faithful readers well know by now). So, I don’t have personal experience with this.

Only it seems to me that January babies could encounter the following:

Of course, I’m not going to feel too badly for the January baby. After all, there are studies showing the many advantages that come from being born at the start of the year. I wrote about what Malcolm Gladwell said about this just last month.

Still, I don’t want to squash the enthusiasm of any January babies. So, I’ll end off with this list of special things about this birth month courtesy of American Greetings:

Oh, OK, one more downside from a Pinterest posting to consider:

*Re-gifting is not one of the birthday taboos I wrote about previously. Maybe it should have been.

We’re always talking about a birthday as someone’s special day. Well, while it may be your special day, you’re likely sharing it with about 20 million other people around the world.

Wolfgang Fengler at the Brookings Institute divided the world’s approximate population by 365 days (he doesn’t appear to account for leap year babies) and came up with 20 million. Better yet, he did the math and determined that with an average life expectancy of 72 years some 285,000 people share your actual date of birth. He drills down (as social scientists like to do) and determines you’re at about 200 people who were likely born at the same moment you were.

Me, I didn’t want to get up early even when I was first introduced to the world. But sharing that moment with others around the world, considering time zones, there were some early risers and night owls among us.

Fengler also lets us look at regional demographic shifts around the globe and tells us where in the world our birthday buddies will be at various given times. It’s really cool and almost makes me think I should have stuck out that stats class ages ago. Only almost. I’m better off reading the social scientists’ results, I’m sure.

In the meantime, check out this National Geographic photo gallery capturing our population explosion.

I’ve written previously about kind folks donating as part of their birthday. If I find a current example I post it on twitter under #generousbday. Today, though, I want to share a past occurrence of birthday generosity. Author Robert Louis Stevenson, who you likely know best for Treasure Island, gave up his birthday to a 12-year-old girl.

Annie Ide, daughter to the U.S. Commissioner to Samoa where Stevenson was at the time living, was churlish about having been born on Christmas Day. So, Stevenson, wrote up a contract granting her rights to his November 13 birthday.

“…considering that I, the said Robert Louis Stevenson, have attained an age when O, we never mention it, and that I have now no further use for a birthday of any description…” he transferred “All and Whole of my rights and privileges in the 13th day of November, formerly my birthday, now, hereby, and henceforth, the birthday of the said A. H. Ide, to have, hold, exercise and enjoy the same in the customary manner, by the sporting of fine raiment, eating of rich meats and receipt of gifts, compliments and copies of verse, according to the manner of our ancestors.”

He did ask that she add the name Louisa to hers “at least in private” and charged her to use the “birthday with moderation and humanity.”

The document was even witnessed and sealed before being sent on to the lucky girl. He was only 41 when he made the donation, but regrettably died three years later succumbing to the ill health that had brought him to Samoa in the first place.

Perhaps it’s karma that the world-renowned author of Kidnapped and Dr. Jekyll and Mr. Hyde is now consistently feted on his “unbirthday” in his native Scotland on RLS Day.

Living in a largely Buddhist kingdom nestled high in the Himalyas, the Bhutanese do not typically celebrate their birthdays. Writing in Travel + Leisure, Alan Brown credited this to their measuring time by “sunrises and seasons, not by dates.” In fact, when citizenship cards were issued to the Bhutanese everyone was given the birth date of January 1. Some 60% of people didn’t even know their date of birth!

Yet this is a kingdom that has eschewed GDP in favor of Gross National Happiness. They value happiness above all, but don’t have Happy Birthdays?!

Perhaps this says something about happiness coming from doing good and being part of something larger rather than focusing on the self. Still, giving up honoring the individual on his or her birthday would not make me happy. Nevertheless, I love this tradition shared by a Canadian teaching in Bhutan, in which schoolchildren share toffees (he baked cookies) so as to give on a birthday rather than receive.

Two Bhutan travel companies I visited online also noted that younger generations are now more particular about their birth dates and the birthday celebration trend is growing among urban dwellers.

Plus, Bhutan’s royal family members are feted on their birthdays. The reigning king’s birthday garners three days of festivals. Now, that’s a birthday!

If you are single on your birthday and that bothers you, don’t live in Denmark. As if turning 30 isn’t a traumatic enough experience, there’s an added level of anxiety-inducing fun among the Danish.

According to Brian Dahl’s site about Danish getaways, a bachelor at 30 is a pebersvend (or “pepper man”) while the unmarried female of the same age is a pebermø (“pepper maid”).

Just in case your neighbors are unaware of your solo status, its a tradition to put a big pepper mill in front of the home of the birthday guy or gal. No, we’re not talking a little pepper grinder someone might use in a restaurant to spice up your entree. This is made out of “something like 2 or 3 old oil drums filled with concrete and decorated with a big number 30.” 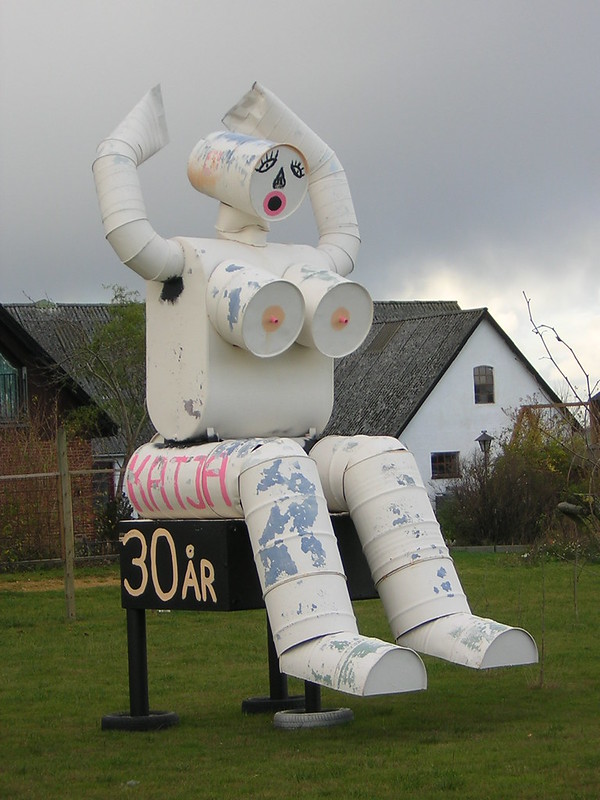 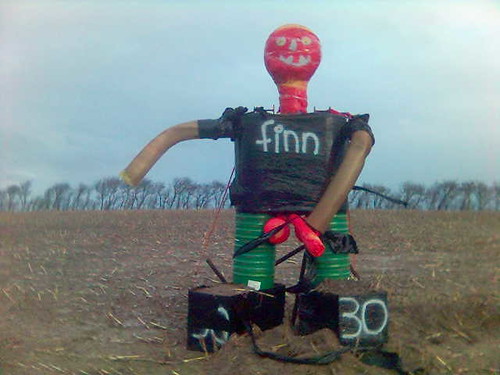 These are even bigger than Dahl led me to imagine! And North Americans thought a cake with a big 30 on top was a tough reminder.