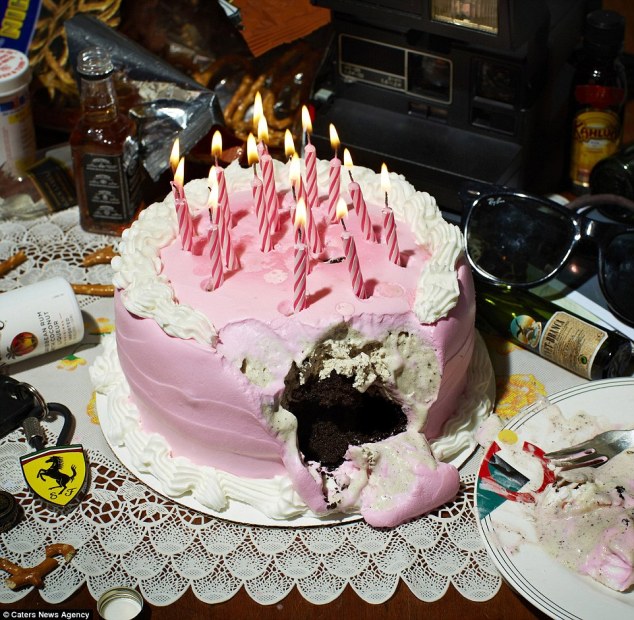 Take a close look at that photo above. Who would you guess was being celebrated with this particular cake?

Consider some of the clues: how many candles? What color cake? What kind of sunglasses are those? And what car would I be driving off in using the keys on the left?

If you’re thinking of 16 Candles or those ferrari keys have you in mind of Ferris Bueller’s Day Off…you’re right there along with director John Hughes. His films were among favorites in my youth.

Hughes made an impression too on New Zealand-born Henry Hargreaves and installation artist Nicole Heffron who have made art out of staged settings for birthday cake photography paying homage to film auteurs.

Take a look at this slideshow of some of the selected works and see how many you can guess. I’ll leave some blank space below the pictures, so you can guess first before seeing the answers.

Ok, then let’s begin with the Moon pies — if the pez dispenser didn’t give George Lucas away, perhaps the other sci-fi accoutrements and Star Wars paraphernalia gave it away.

Next up, the Mickey mold and items around this kitchen are inspired by Walt Disney.

The staircase on this sleekly elegant birthday table setting is for Alfred Hitchcock, particularly Vertigo.

The baked goods from New York’s Little Italy as well as the gambling and cigars are hints of Martin Scorsese’s Casino and Mean Streets.

Stanley Kubrick’s A Clockwork Orange is suggested by the pills, milk and Beethoven album.

The samurai sword by the blood-spattered cake is a reminder of Quentin Tarantino’s Kill Bill.

The bear-shaped cake with a can of beer is to put you in mind of Ted director Seth MacFarlane (who probably doesn’t often see his films lumped with Scorcese, Kubrick and Hitchcock!).

John Waters’ identity is given away by his Pink Flamingos cake, a reference to the title of the 1972 movie starring drag queen Divine.

The cherry pie reminds us of Agent Cooper’s enthusiasm for the pastry even in the midst of solving the Laura Palmer case in David Lynch’s Twin Peaks.

The artists, who spent a year on the project taking one auteur to focus on each month, stated, “the series provides visual narratives that are both a celebration of each filmmaker’s unique vision and a glimpse into the minds of their most impassioned fans.”

You can see the entire series on Hargreaves’ site, where he also shares his photos of inmates’ last supper requests and other innovative project ideas.

2 thoughts on “Ode to Auteurs Via Cake Photography”