A 17-year-old recently aimed to use her birthday to get two special requests granted. She wrote up a Birthday Contract (even with nifty calligraphy for the title) stating; “It is hereby stated as in this letter you MUST agree to any TWO of my requests no matter how selfish they may be. After all, it’s my BIRTHDAY.” 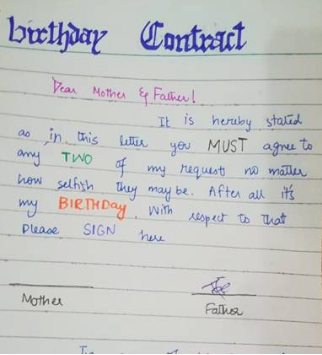 She also required her parents to sign again under the penalty addendum (man, I wish she’d used that word), stating the consequences of contract violation:

This bold one-page statement of demands finished with the note: “Good parents never back out from their promise (especially on birthdays) [Universal Law].”

Dad, however, found some wiggle room. Take another look at that contract violation section and you’ll see he wrote in a “0.” before the 5000 rupee fine. He brought her haul in Pakistani rupees down dramatically. In U.S. dollars this is the equivalent of $77 down to 77 cents (valued on the July day I’m writing this).

There was no place visible on the contract for the daughter — who apparently is interested in medicine more than law — to sign and bind the document. So, she appears to have been outsmarted. All this was shared via her amused brother on Twitter and then picked up in The Indian Express.

It’s an entertaining story, and of course I like best that this girl is not only smart but was looking forward to being spoiled on her birthday.