Yeah, you know you know that song. In fact the 50 cent birthday song was a quick international hit when it was released in 1993. A Source columnist even suggested the song challenged Stevie Wonder’s “Happy Birthday” as “the birthday song” of the Black community.

The song, with “Dr. Dre and his beastly beat making over calmly accurate handclaps and driving synths,” saw 50 Cent, born Curtis Jackson, making way more than his moniker in profits off of the celebratory song’s success.

So, its a hit on your big day and whatever other day you want to rock the house.

The Source writer in the article, “How 50 Cent’s ‘In Da Club’ influenced birthday themes all over the world,” further noted the song glorifies life. Noting, “This is only logical, with the rapper’s prior near death experience due to nine bullets including one to the face.”

Yet it may be the song’s simplicity that truly drove it to becoming a top birthday song. “Simplicity is a big key to hit music,” said 50 via People. “Don’t overthink things, just organically see what you feel when the production comes in. Like, ‘Go shorty, it’s your birthday.’ It’s not rocket science. It’s a simple statement.”

The song’s simple statement earned it a spot atop the Billboard Hot 100 and several other charts, including internationally in countries like Greece, Switzerland, and Austria.

Today, whether you’re in the Black community or not, if you’re a certain age, there’s a very good chance “In da Club” is on your birthday playlist. 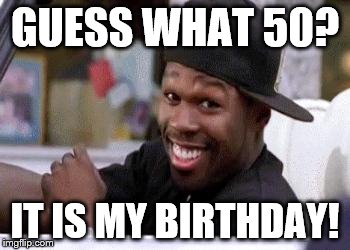